The ABS released employment statistics for May last week and the numbers point to continued weakness in the labour market.

The headline you would have read/heard was that the unemployment rate declined. It’s true, it did decline. But that single data point hides the real state of the labour market.

Firstly, the key points for May;

I think the chart below does a good job to highlight one of the key weaknesses now facing our labour market and the economy – the shift to PT jobs. The majority of new jobs created over the last month, six months and year has been PT in nature. In fact, over the last year, 66% of the growth in employed persons has been PT and that number rises to 84% on a six month basis.

Underneath these numbers have been some interesting shifts. As mentioned above, the key one being the shift towards PT employed. At the on-set of the GFC we saw a sharp rise in the ratio of PT jobs to total employed (below), reaching a high of 30.2%. Whilst that ratio looked like it was drifting down after the initial fear of the GFC subsided, it has now reached that same ratio of 30.2% of PT jobs to total employed. This ratio has started to move higher since Oct 2012:

It’s actually interesting the growth in PT employed doesn’t consistently mirror the business cycle the way that growth in total persons employed does. 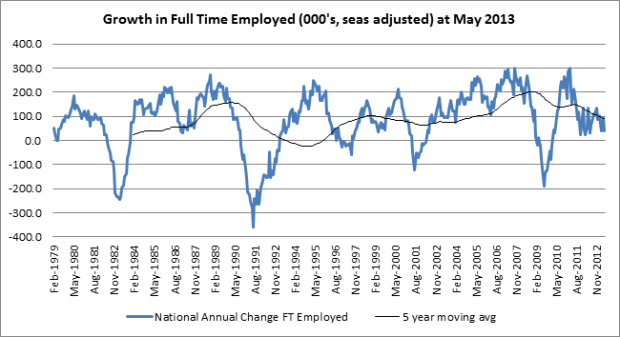 When you look at the growth in FT employed (chart above), you start to see just how severe the impact of the GFC was on FT jobs – the decline was worse than the downturn of 2001 and almost on par with the recession of the early 80’s. At May 2013 annual FT employed grew by +41.1k – which is well below the average growth for May over the last ten years of +145k FT employed. The current growth is only 28% of the last ten year average.

The most obvious implication of a growing proportion of PT to FT employed is lower income. Whilst gaining PT jobs is better than no employment growth at all, the bills and the mortgage still need to be paid. Lower income impacts discretionary spending as well as a household’s ability to take on (more) debt.

This is a fairly large increase in unemployment benefits paid out, suggesting continued weakness in the labour market. I will also double check to see if this increase reflects any changes to the policy or to benefits.

In previous posts, I’ve looked at the growth in hours worked. This seems to be a useful barometer of how the labour market and economy generally, is faring. I have made the observation that during past recessions/downturns, growth in PT hour accelerates and growth in FT hours slows down (usually declines) – where the red & blue lines diverge.

A similar trend could be starting to emerge. So far, we are seeing higher growth in PT hours (red line) and growth in FT hours at zero (blue line, year on year basis, trend data). On a month on month basis, FT hours have declined slightly.

Conversely, we are also starting to see a jump in unemployment in WA.

In the previous year May ’12 v May ’11, unemployment in WA was actually declining (blue bars). In the space of one year, WA has now become the second largest contributor to total unemployment, with unemployment growth of +16.5k.

So despite a very slight decline in the unemployment rate for the month, weakness remains in the labour market. The main point of this employment update is that as the economy slows down, we are seeing higher growth in PT employment than FT employment. Admittedly, growth in PT is better than no employment growth at all, but this shift may start to impact income and spending down the track. We are also starting to see the shift from the mining investment boom (which turned out to be labour-intensive) adversely impact the employment numbers and this will no doubt have a wide ranging impact on the economy.