The latest CPI figures for the June 2013 quarter were released by the ABS last week. The headline growth figures were slightly lower than reported in the previous quarter;

Whilst the headline figures are reported in the media, there are two other measures of inflation that are reviewed by the RBA – the weighted median and the trimmed mean. The CPI is made up of a basket of household goods & services. Prices of items in that basket are sometimes subject to short term volatility eg; fruit & veg, which can distort the view of the underlying inflation trend. The trimmed mean and the weighted median are measures used to ascertain the underlying inflation trends. For the June 2013 qtr;

Interesting that this month, the two measures of underlying inflation are moving to either side of the spectrum (red & green lines in the chart above). The trimmed mean is pointing to reduced price pressures and sitting at the lower end of the RBA’s 2-3% target range and the weighted median shows a stronger uptick in core inflation and continued rise in the trend (let’s see that little nugget raised in the media). So what does that mean? I read an interesting post that deals with this very issue. Coincidently, it was the only other post to raise the issue of the difference between the two measures of underlying inflation in the data released by the ABS. Basically, the trimmed mean is the better of the two measures and this is what the RBA prefers to look at as a guide to underlying inflation. The RBA paper covering this issue can be viewed here.

Based on the trimmed mean, inflationary pressures in the economy continue to weaken. In its own words, the RBA makes the link between weakening aggregate demand and reduced pricing pressure. This, together with a raft of other weak economic data, will likely pave the way for further interest rate cuts.

The main contributors to CPI changes during the June 2013 quarter were housing, health, clothing & footwear and alcohol & tobacco.

Over the full year to June 2013, housing, health and alcohol & tobacco were the main contributors to CPI change. 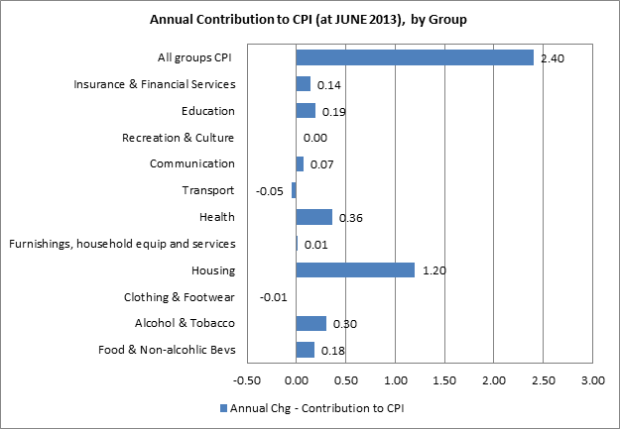 From these two charts it’s clear that housing (purchase of owner occupied dwellings, rents & utilities) & health care continue to be a source of price pressure in the economy (as well as alcohol & tobacco). The June qtr. reading on clothing & footwear is quite different to the annual trend – possibly due to a weaker $AUD? The impact of movements in the dollar is yet to be fully seen in the CPI.

We can gain further insight into the CPI by looking at the breakdown between tradeable and non-tradeable items/categories. This provides some insight as to the extent to which price changes are attributable to domestic factors (changes in labour costs, productivity) or international factors such as exchange rate movements or changes in supply and demand in overseas markets. Again, this is another way to gauge the source of pricing pressures in the economy. A brief explanation of the two measures is below;

What I think is interesting about this view of the CPI is that it shows some pockets of pricing pressure in Australia. Annual growth in the non-tradable component is now running at 4.3%.

This high level of non-tradeable inflation is off-set by the very low print (and continued decline) within the tradeable categories of -0.7% year on year. I’ve broken down each of the categories into their smaller component parts to get an understanding of which categories are driving price changes.

Tradeable – those items whose prices are largely determined on the world market (approx. 40% of CPI by weight). There are 47 sub categories in the tradeable group. 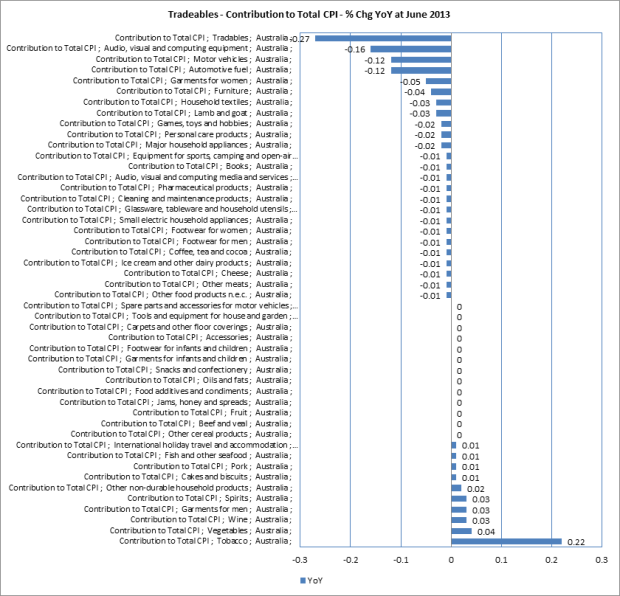 This is the contribution to CPI year on year which gives you exactly that – how each sub category contributes to the total growth in prices. An important point is that not all categories are weighted the same. In the case of tradeables, auto fuel, motor vehicles, tobacco and international travel and accommodation are the four largest categories, accounting for 30% by weight. Auto fuel and motor vehicles have been the major contributors to price declines over the last year (the largest by weight, but not the largest % change in prices). In the audio visual category, which is only 3% of the tradeable index, prices are down -12% year on year – one of the largest price decreases.

The question now is what impact does the recent decline in the $AUD have on these categories (given they are import/export exposed)? No doubt cars & auto fuel will likely see price increases as a result of a weakening $AUD. A good example is Qantas now increasing its fuel levy and airfares as a result of lower dollar and higher fuel charges (based in USD). The question is, to what degree will the other categories be impacted by a weaker $AUD? Tradeables are more likely (than non-tradeable) to be a larger source of price pressure as the $AUD weakens and this should become evident in the next quarter of data. But there are also competitive factors at work that could see prices, such as food, remain subdued. As long as the major retailers continue to battle it out for market share and sales (with subdued demand), prices may remain lower, possibly squeezing the margins of manufacturers/distributors further (via higher import costs). Higher prices (via imports) may result in decreased spending, especially in the more discretionary categories.

Non-tradeable – the remaining categories (60% of CPI by weight). As mentioned earlier, non-tradeable have been the key driver of price pressure in Australia. 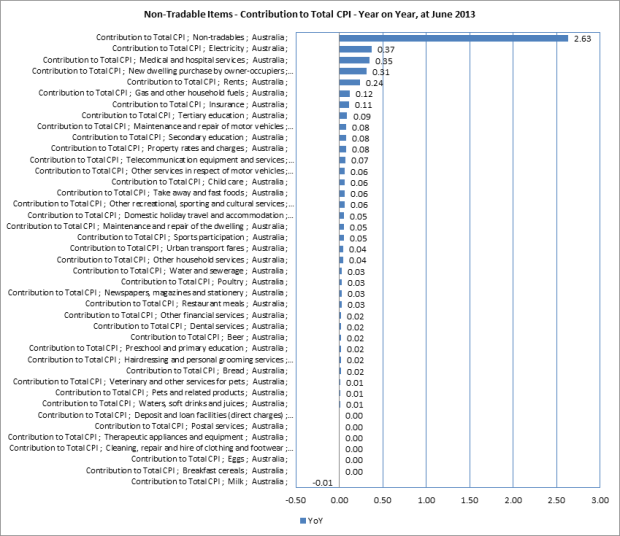 The top four categories by weight are new dwelling purchases by owner occupiers, rents, medical and electricity. They account for 35% of the non-tradeable price index. It just so happens that electricity and medical also recorded the highest % price increase year on year. Rents and dwellings are growing above the average as well, which is driving the higher contribution of these two categories. But it’s the overall distribution of price growth that is also impacting non-tradeable inflation; 55% of the non-tradeable categories are growing faster than the average, but these 22 categories represent 64% of the index by weight. I would argue that it’s not higher labour charges that are responsible for the higher prices of the top four categories. Pricing pressure in these four categories is likely to remain, especially as the RBA cuts interest rates and irrespective of movements in the $AUD.

There are several points about the impact of lower interest rates:

1) The recent spate of interest rate cuts has started to break the back of the persistently high $AUD. Whilst good for exports (and local manufacturers and employment), it will increase the price of imports – I’d expect to see greater impact of a lower $AUD in the tradeable categories. As mentioned earlier, in an environment of subdued demand, there could be greater margin pressure placed on businesses that feel they cannot pass though price increases without seeing a fall in sales.

2) Lower interest burden on mortgage holders – this will reduce pressure on disposable income, affecting approx. 34% of households that have a mortgage (and countless others with interest-only investment property loans). Conversely, there are households (the number unknown) that also rely on interest income. A cut in rates will reduce the income of these households (and the savings rate has been going up). You would hope that it would balance out in the economy as a net increase in disposable income (it’s unclear that’s what will happen) leading to an increase in aggregate demand.

3) It’s likely that this cycle of rate cuts has kept demand for housing finance and hence real estate prices high (mostly via investors). This impacts all home owners by maintaining prices. But this will continue to keep the non-tradeable price growth high as well (new dwellings and rents are large components of the non-tradeable price increase). High levels of domestic household mortgage debt and deteriorating employment will act as headwinds to greater growth in house prices.

4) Lower interest rates have not yet appeared to stimulate investment spending in most quarters of the economy – this is one to keep an eye on.