The first labour market report for 2014 showed no change from the trend of 2013. Employment growth continued to deteriorate and unemployment continued to grind higher. There was one bright spot in this report – the monthly declines recorded in aggregate FT hours had slowed in the latest month.

Looking at the longer term trend in total employment growth, it’s clear how close we are to GFC lows, but it’s also clear that we are a long way from the depths reached during the recessions of the early 80’s and early 90’s. But that doesn’t make the current trend any less concerning. 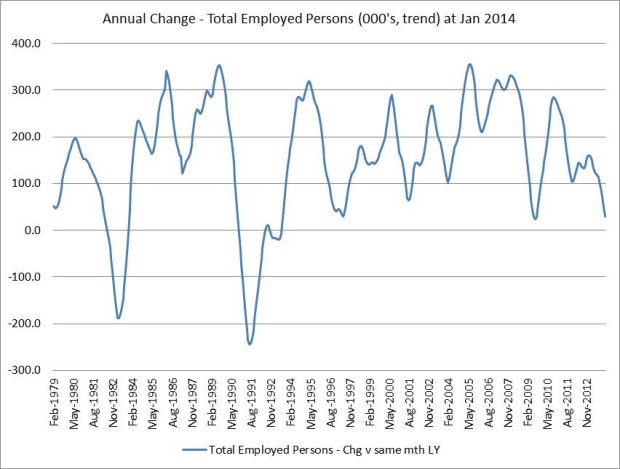 What is driving the decline in employment is the decline in full-time jobs and now, even slower growth in part-time jobs. Again, looking at the longer-term trend provides some benchmarks as to the current level of labour market weakness.

Why is this important? It means that the size of the labour force, relative to the size of the population is getting smaller. The Labour Force is defined as total persons employed plus total persons unemployed and looking for work. There are several reasons why people would leave the labour force, but the main ones are either retirement, further education or discouraged job-seekers. Understanding which one of these factors is driving the trend is important – as there can be different implications. As mentioned, this will be a topic for a separate post. Until we understand the drivers or combination thereof, it’s misleading to think of all workers dropping out of the labour force as discouraged. This is the method some use to arrive at “what the unemployment rate would have been if the LFPR hadn’t declined”. The assumption underlying this is that the entire decline in the LFPR is due to discouraged workers. So the difference in the size of the labour force is added to the total number of unemployed persons. Just for curiosity though, if the LFPR in Jan 2014 did stay the same as Jan 2013, and they were all discouraged workers, then the unemployment rate could have been as high as 6.8%.

Growth in part-time hours continued to accelerate and is now over +6% – which is neither unusual during a weaker economy nor is it a new trend in this most recent series (see chart below). The one bright spot is that full-time hours have at least not commenced a decline on an annual basis. 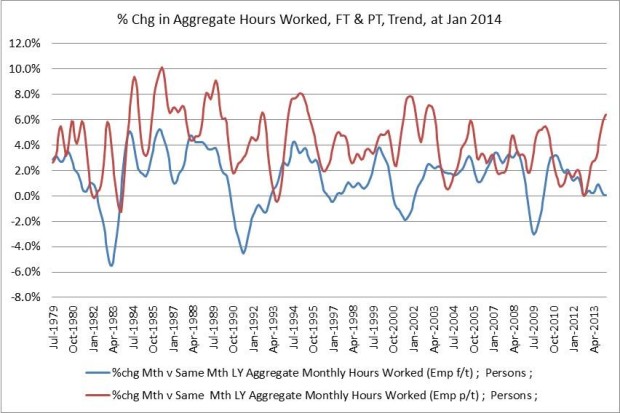 Month on month, full-time hours have declined for the last 6 months in a row. But this trend does seem to be slowing down – below is the actual aggregate FT hours worked over the last year:-

Full time hours peaked in Jul ’13 and have declined, month on month since then. But aggregate FT hours are still higher than for the same time last year. How to reconcile no growth in FT hours between Dec & Jan with the corresponding decline of -9.7k FT employed persons in the same time period? Less FT workers doing the same number of FT hours. Hopefully it means that demand isn’t weakening (still required to maintain the same number of hours to produce output) and there will be at least a slow-down in the rate of decline of FT employed persons in the near future.