There are several important drivers that are likely to affect and/or continue to affect the Australian economy in 2015. The list below is not intended as a predication or as a projection – many of the themes below are currently in place. This list is intended as a collection of the most important issues facing the economy and will provide context for the posts here during 2015.

How to characterise the current state of the economy? Its mixed coming into 2015 – some indicators are stronger than this time last year, others weaker.

Overall, the current rate of economic growth in Australia remains below the longer term average and this has been the case since 2008/09. Below is the Department of Treasury growth estimates for 2015 and beyond, as outlined in the MYEFO in December 2014.

The projections by the Australian Treasury for growth over the coming year is equivalent to the growth of the last two (2) years, approx. 2.5%. Using this growth figure as a starting point will help to guide the expectations of the performance of major macroeconomic components.

In a previous post, I outlined that this recent period of lower growth had coincided with an equally lengthy period of unemployment growth. Under the growth assumptions outlined above, it’s likely that unemployment and under-employment will continue to persist during 2015. At the end of 2014, just on 770k persons were counted as unemployed. That’s an increase of 55k people over 2014. For comparison, the average annual growth in unemployed persons as at December over the last 10 years was +15k. Overall economic growth will need to accelerate well above the current level and the long term average and remain there consistently before this level of unemployment is reduced. An important feature of the labour market in recent times has been the higher growth in part time over full time employed persons, as well as overall lower growth in employment. Total employment will need to grow by over 200k persons on an annual basis just to match the current level of population growth, let alone start to reduce the level of underemployment. Annual employment growth at Dec 2014 was +158k persons.

This lower growth has also coincided with lower growth in the general price level, with the exception of housing. While this lower level of price growth opens the way for the RBA to continue to stimulate via interest rate cuts, the growth in house prices (fuelled by lower rates) will likely hold the RBA back from acting.  Wages growth is the lowest on record and real wages are declining, reflecting the excess capacity in the labour market. The fall in the AUD is likely to result in higher growth in tradable inflation, but will also be offset by some degree by the fall in fuel prices. The slowing growth in non-tradable inflation is more reflective of lower demand in the domestic economy – having been driven up during the Terms of Trade (ToT) boom years. Slowing income growth, reduced business investment and labour market capacity will likely weigh on the general level of prices in the economy.

Either way, I’ll be looking for deviations from this 2.5% rate of growth. The ability of the economy to grow at an accelerated rate will depend on several things:-

An enormous amount is happening on this front that will both add and subtract from growth. The transition from the investment to the production phase will have several implications:-

Can interest rates stimulate non-resources investment to “fill the gap”?

How far will the AUD go?

This is a positive factor in favour of local import competing businesses and export focused businesses. Modelling by the RBA suggests that ideal position for the AUD is around mid the mid-0.70c mark – and we are starting the year at just below US$0.80. A lower currency will also see higher prices for imported products, so there could be some negative CPI impact. Depending on how low the AUD falls, there is a risk that interest rates in Australia may increase.

Much of our confidence, wealth and debt is tied up in the performance of house prices. Over the last year, house prices have grown by 9% across the 8 capital cities – similar to the rate of growth achieved prior to the GFC. This has been led predominantly by Sydney (+14%) while all other markets recorded growth between 7% and 2.4% (source: ABS). The best leading indicator of house prices is growth in housing finance and while there is no clear trend down, the growth in housing finance is slowing – more so for owner occupiers. Any further interest rate cuts could see another leg up in housing lending, but probably not to the same degree as previous rate cuts given higher unemployment, lower income growth and real mortgage debt almost back to its historic high levels.

The watch out for is ASIC, APRA and/or the RBA to implement policies aimed at slowing housing lending.  All three (3) bodies have indicated a growing concern, especially around the growth in interest only loans.

The important thing to watch for here is the combination of the continued slowdown in National income growth (and possibly even larger outright falls in National income) due to unfavourable ToT, continued excess capacity in the labour market and unemployment expectations to further impact consumption spending and growth in housing finance. 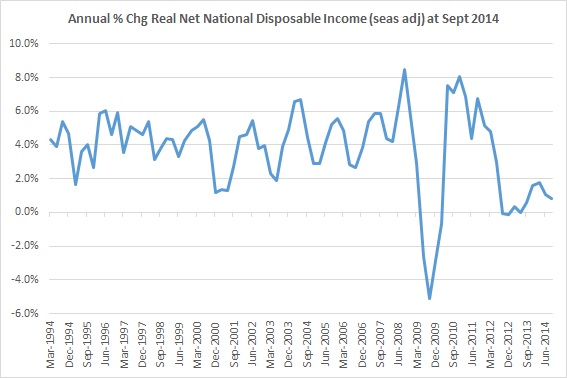 The growth in National disposable income has slowed considerably since 2011 and this is likely having an impact on consumption growth.

So far the government has failed to generate support for its May 2014 budget. The proposed budget & reforms have not been approved through the Senate and instead of cutting the deficit, the MYEFO in December showed that the deficit has in fact become larger. According to budget analysis, most of the deterioration has been as a result of a slower economy (and overly optimistic forecasts of commodity prices). The upshot is that the budget is likely to have less of a contractionary impact on the economy. Both monetary and fiscal policy are, in effect, pointing in the same direction. Philosophically, the government is not focused on delivering an expansionary fiscal outcome, but that’s in effect what has been achieved. Unfortunately, if there is any further deterioration in the economy, it will mean an even larger deficit – something that ratings agencies will be watching. Any downgrade to our credit rating could also have a negative impact on local interest rates.

An important theme within the area of government spending is whether the government can successfully implement its infrastructure investment plan and various other structural reforms like taxation. Whilst infrastructure investment would enhance output and likely employment outside of housing and mining in the short term, it would also have long term benefits for business development and future productivity growth. The success of such a program depends heavily on whether the investment is strategic and directed to building the infrastructure that will support sustainable business development, innovation and productivity growth. Budget analysis on the future drivers of income growth highlight that productivity growth will be crucial to offset declines in the ToT and the effects of the ageing population.